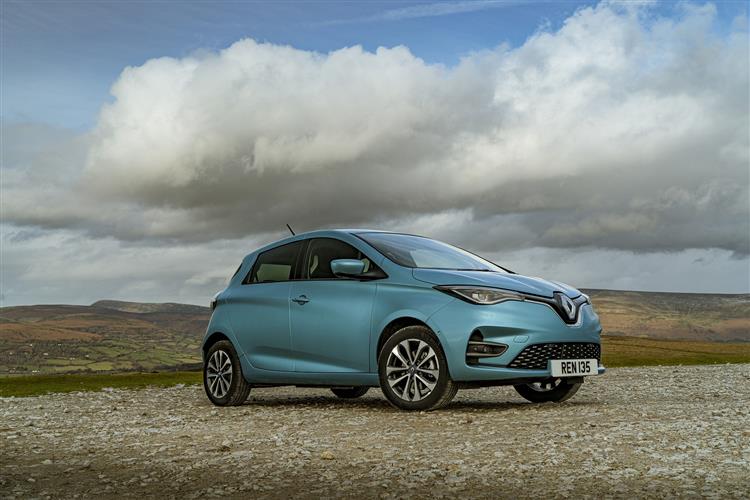 If you've ever hankered after an electric car, there might have been a few impediments to an impending purchase. The first wave of electric cars weren't styled very appealingly. Never a good thing. Then came a second generation of vehicles that looked more like cars but which carried price tags that read like a bad joke. Electric cars were either cheap and horrible or expensive and barely adequate. Even when we moved on a bit from that, they still couldn't offer a credible level of battery range for most potential customers. Renault though, wants to change things. The brand has already brought us the fun Twizy lightweight city car and even a Kangoo van featuring battery power. With the improved version of this ZOE supermini though, the company's got really serious about all-electric concept, notably so with the introduction of the version we're going to talk about here with its more capable 52kWh Z.E. battery and uprated R135 electric motor.

The ZOE is designed for city driving, so the steering has been geared to offer a smooth effortless feel. Likewise, the throttle pedal doesn't offer too much in the way of resistance but the brake responds to a good hoofing which seems a little odd at first. Like all electric cars, the ZOE feels eerily quiet as it pulls away, with no discernible engine noise other than a faint whine. This usually means you'll hear every bump and thump from the road as a result, but Renault has done a good job on chassis refinement and ride quality is excellent. To prevent pedestrians waltzing out in front of its silent approach, the ZOE emits a sound at low speeds but you can barely hear it at all from inside the vehicle. The 'Z.E. Voice' can be switched between three different sounds or can be completely switched off if you fancy a new bonnet ornament. Handling is as good as you'd imagine for a car with such a low centre of gravity. The improved R135 synchronous electric motor with rotor coil has a power output that's way up on the orginal unit fitted to this car. This unit delivers the equivalent of 135PS and improved torque for faster acceleration. The motor packs a healthy 245Nm from zero rpm and drives through a single speed gearbox, helping the ZOE sprint from 0 to 62mph in less than 10 seconds and onto a top speed of 87mph. As an indication of its real world pace the 100kW model can accelerate from 50 to 75 mph in just 7.1 seconds, which is 2.2 seconds quicker than than the 80kW 110PS R110 engine, which is also still available. Of course, drive like this and you'll decimate the claimed 242 mile WLTP driving range figure.

Most people would walk past the ZOE and not take it for anything other than Renault's latest cute little car. Rather refreshingly for a car of this kind, its design inspiration is sophisticated and grown-up. With curvaceous flanks and neat one-box shape, it's quite a good-looking thing, especially in this revised form, where the car features full-LED headlamps, smarter bumpers and bigger LED tail lights. The fascia's been updated too, primarily with a new 10-inch TFT instrument cluster, which is standard across the range. The dashboard has been completely redesigned to significantly improve the quality of its finishes and on 'Iconic' models there is 100 percent recycled seat upholstery. The centre of the dashboard houses the Renault EASY LINK multimedia system, which on certain models now benefits from a large 9.3-inch touchscreen. There's now an electronic parking brake too. Otherwise, things are much as before. Some of the plastics aren't going to give Audi designers anything much to think about, but being built down to a price is very much the point of this car. It's no bad thing. The view out is extremely good as you sit rather high but a lack of seat height adjustability might prove an issue for taller drivers. As with most superminis, space in the back is more mini than super but access is good thanks to the standard five-door layout, and there's more than enough room back there for the kids. One substantial plus point is the 338-litre boot which extends to 1,225-litres should you fold the one-piece rear bench.

There are two ZOE mechanical specs available; the old 'R110' 80kW version; or the infinitely preferrable 'R135' 100kW model, with its faster acceleration and longer operating range. The R110 is priced from around £28,995 after deduction of the £2,500 government Plug-in Car Grant. The R135 vcariant costs from around £30,995, after deduction of said grant. There are 'Play', 'Iconic' and 'GT Line' trim levels. All derivatives feature the multimedia system, R-Link, as standard which can now feature Android Auto smartphone-mirroring. To enable drivers to control the infotainment system's functions without taking their eyes off the road, R-Link features a big seven-inch display, steering wheel-mounted controls and voice recognition. It also delivers integrated connectivity with motoring services and applications available from the R-Link Store. Other standard ZOE features include Bluetooth, climate control, cruise control, Bluetooth, a Renault keycard and a speed limiter function. Programmable pre-conditioning heats or cools ZOE's cabin when the vehicle is charging, so when the driver gets into the car, the cabin is just the right temperature and battery charge is saved in use. As a further neat touch, this can be activated remotely via the owner's smartphone.

The key question though, concerns driving range. This model's original 22kWh battery could only take this car 93 miles on a full charge; not good enough. The introduction of the brand's much improved 52kWh battery is important then, boosting the WLTP test cycle reading to 242 miles. That could make all the difference for potential electric car buyers. What about charging? Well, the standard type-2 cable provided with the car and its Cameleon charger are used for everyday AC charging use, such as at home with a Wallbox, at work, in the car park or on public roads using anything up to a 22kW supply. When using a 7kW Wallbox a 100kW ZOE model can charge from 0 to 100 percent in 9 hours and 25 minutes. This ensures that a complete recharge can comfortably be achieved overnight. Around 190 miles of range can be achieved in just 8 hours. Users charging their vehicle at home can also benefit from the programming options, adjusting their recharge to correspond with tariff fluctuations from their electricity supplier. Plugging the ZOE into a public 22kW roadside charger can deliver a useful 78 miles of range in only one hour. However, the fastest recharge times are achieved with the new 50kW DC charging option, which is perfect for longer trips. Replenishing the battery in this way can add around 90 miles of range in as little as half an hour. Where the ZOE scores a knockout blow is if you need to travel into congestion zones. London offers 100% exemption while Westminster council offers four hours free parking and a number of charging points. Renault still hasn't fully got round the issue that most urban drivers have to leave their cars parked on the street and so have no practical way of recharging from a home power point.

This improved Renault ZOE represents another step towards the electric vehicle becoming a genuinely practical mode of transport for the average motorist. There are still a number of caveats that will inhibit mass take-up, but most of these are due to the inherent nature of electric vehicles themselves, rather than any flaw in the ZOE in particular. On the contrary, it's a likeable little thing and might just be the most attractive electric vehicle currently on sale. If you have off-street parking and a short-ish and predictable urban commute, the numbers don't work out at all badly and there aren't many small cars that are much more relaxing to pilot through the city streets. We think the potential WLTP range increase to as much as 242 miles will make all the difference for potential buyers, but the arithmetic still works out in favour of a small petrol supermini on a pure costs basis. Until taxation legislation more completely favours Evs, that's going to be very hard to change. The gap is small though and many drivers will be willing to pay a small premium for the ZOE's smooth ride, silent acceleration and feel-good vibe. If it works for you, why not?